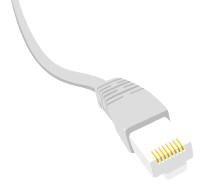 Expect to see these around for some time to come

Recently we went to UKNOF where Alcatel Lucent gave a helpful presentation on new ethernet speeds.

Currently most network connectivity is 1Gbps ethernet over Cat5e copper which stretches up to 100m. There is an infrequently used standard for 10Gbps over Cat6 copper to 55m for higher speeds.

Now demand is starting to appear for faster than 1Gbps speeds, and it’s very attractive to do this without replacing the installed base of Cat5e and Cat6 cabling. There are new standards in the pipeline for 2.5Gbps and 5Gbps ethernet over Cat5e/Cat6 cabling.

In the data centre it’s common to have 10Gbps over SFP+ direct attach for short interconnects (up to 10m) and 1Gbps/10Gbps/40Gbps/100Gbps over fibre for longer distances. 1Gbps and 10Gbps are widely adopted. 40Gbps and 100Gbps are a different design, implemented by combining multiple lanes of traffic at 10Gbps to act as a single link. 100Gbps has changed to be 4 lanes at 25Gbps rather than 10 at 10Gbps.

The more lanes you have in use, the more switches and switching chips you need – but effectively this means that 40Gbps has the same cost in port count as 100Gbps. The next generation of 100Gbps switching hardware will consist of a large number of lanes that run at either 10Gbps or 25Gbps. With current interfaces, you’d use 4 lanes for 100Gbps, 4 lanes for 40Gbps or 1 lane for 10Gbps. The obvious gap is using a single lane for 25Gbps standard so you can connect vastly more devices at greater than 10Gbps speeds.

So in the near future, we’re expecting to see 2.5Gbps and 25Gbps ethernet becoming available, and in the longer term work has now started on 400Gbps standards.