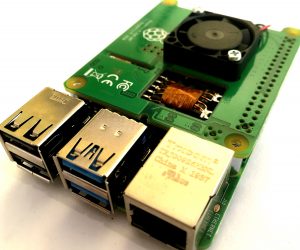 Our PI 4 servers all wear the Power over Ethernet HAT to provide power and cooling to the CPU.

We’re now offering these in our Raspberry Pi Cloud starting from £7.50/month or 1.2p/hour.

Since the release of the Raspberry Pi 4 last year, it’s been an obvious addition to our Raspberry Pi cloud, but it’s taken us a little while to make it happen. Our Raspberry Pi Cloud relies on network boot in order to ensure that customers can’t brick or compromise servers and, at launch, the Pi 4 wasn’t able to network boot. We now have a stable replacement firmware with full PXE boot support.

The Pi 4 represents a significant upgrade over the Pi 3; it is over twice as fast, has four times the RAM and the network card runs at full gigabit speed. On a network-booted server this gives you much faster file access in addition to more bandwidth out to the internet. We’ve done considerable back-end work to support the Pi 4. We’ve implemented:

Ben Nuttall has been running some secret beta testing with his project Pi Wheels which builds Python packages for the Raspberry Pi. We’re grateful for his help.

Is it any good?

We’ve historically used WordPress as a benchmarking tool, mostly because it’s representative of web applications in general and as a hosting company we manage a lot of those. So we put the Raspberry Pi 4 up against a Well Known Cloud Provider that offers ARM instances. We benchmarked against both first generation (a1) and second generation (m6g) instances.

Our test was rendering 10,000 pages from a default WordPress install at a concurrency level of 50.

In both cases the Pi 4 is approximately twice as fast at a quarter of the price.