Our Pi 4 servers all wear the Power over Ethernet HAT to provide power and cooling to the CPU.

Since the launch of the 8GB Raspberry Pi 4 we’ve had many requests to add these to our Raspberry Pi cloud. Meanwhile many Raspberry Pi users have read about overclocking the Raspberry Pi and running at a higher clock speed.

Overclocking further increases the computing power of the Pi, but brings significant operational issues for our Pi cloud. Not all Raspberry Pi hardware will run reliably at the higher clockspeed and the higher voltage required to support it. Increasing the clockspeed and voltage significantly increases the power consumption and thus the cooling requirements necessary to prevent overheating. We’ve spent a considerable amount of time testing and we’re now ready to launch our first 8GB Raspberry Pi 4 cluster. We’re offering them at two clock speeds: the stock 1.5GHz and overclocked to 2GHz.

The overclocked Raspberry Pis have all been run at a significant CPU load for several weeks to test their stability before release. Any that failed the stability test have been added to the cloud at the normal 1.5GHz clockspeed.

The 8GB Pi is available at 1.5GHz and 2GHz clock speeds. Supported operating systems are Raspberry Pi OS 64 and Ubuntu 64. 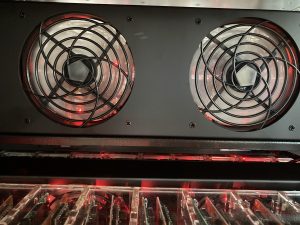 Larger fans provide more cooling to our 8GB Pi4 cloud so we can run at higher clockspeeds.